Some philatelists and stamp dealers produced private covers/cachets to commemorate the flight, and sent mail on this service using them. An excellent listing of these was first published by Praful Thakkar in his Collectors Guide to First Day Covers etc. in 2010. Below each cover, I have mentioned his catalogue reference number.

These covers are illustrated in my gallery reachable by clicking the button below. 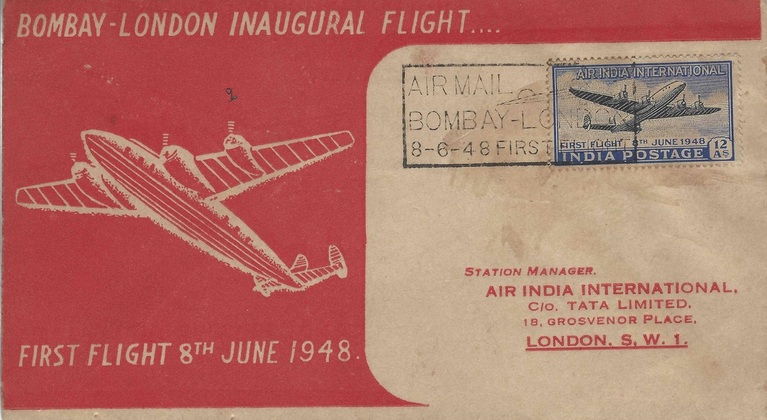 PT 948.1.4
Private cover addressed to Air-India International, London.
PT 948.1.5
Private cover with a Douglas DC-4 airplane picture and details of the flight.
Left: An unused cover in mint condition
Right: A registered cover sent to Felpham, Sussex, England. The 4 as. registration charge is stamped on the reverse. 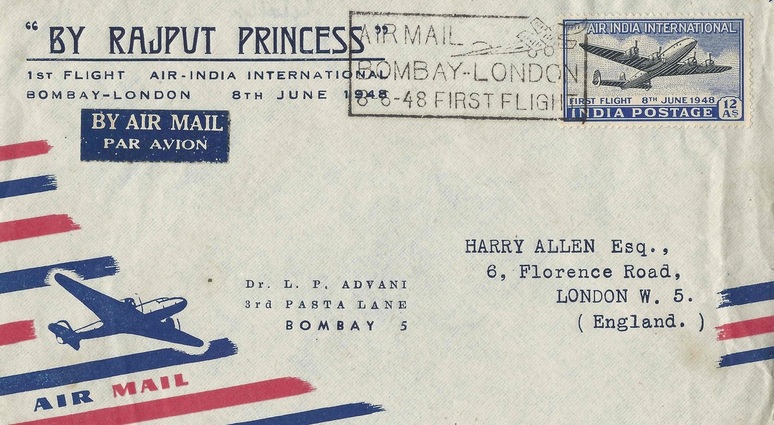 PT 948.1.6
Airmail cover overprinted privately by Dr. L. P. Advani, a philatelist from Bombay. The Rajput Princess (VT-CQR) was originally intended to be used for the inaugural journey, but later it was decided that the Malabar Princess (VT-CQP) would be used for this flight. This explains what the cover has 'BY RAJPUT PRINCESS' printed on the cover. 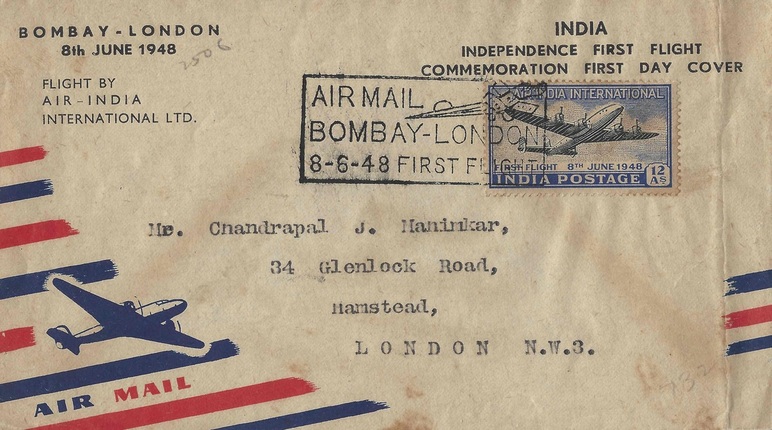 PT 948.1.8
Another example of an airmail cover overprinted into a private cover for this flight. This one does not mention the name of the airplane, but has all the remaining flight information on it. 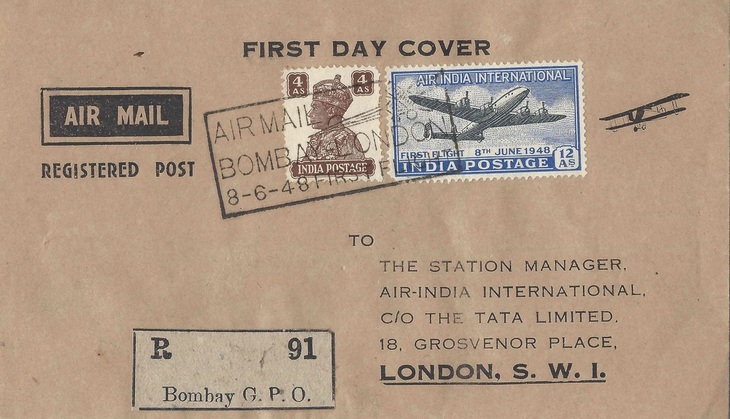 PT 948.1.9
Private cover with an image of a vintage bi-plane, and sent by registered post to London 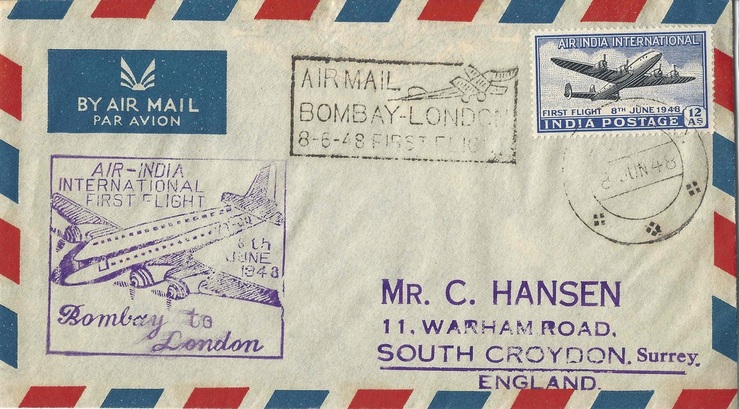 PT 948.1.10
Top : Airmail cover with a square violet hand stamp with the flight information, and an image of a Douglas DC-4. Popularly known as the Hansen cover, and named after the philatelic dealer who produced the hand stamp.
Top: Souvenir cover issued by the post office for use on that day with 12 a. postage stamp issued that day to London, addressed to C. Hansen, with his private rectangular violet cachet hand stamped on the reverse.
PT 948.1.11
Private airmail cover, with flight information printed. The clever use of the colours of the Indian national flag, Saffron, White and Green, makes the cover design all the more appealing.

Unlisted in PT
This is quite a rare private cover. It has the flight information printed, and is remarkably well preserved. Two additional aspects make this cover more special. On the bottom left is the receiving mark on the reverse of the cover. It says LONDON CHIEF OFFICE E.C.1, 10 JL 48. Receiving larks in London are quite rare, as the Postmaster of the London G.P.O. had refused to affix them on any incoming mail. Also featured below is the insert found inside the cover which reads, With The Compliments of Air-India International. This seems to suggest some kind of official connection. Since it is a printed item, I am sure many more such covers exist, and have simply to surface.
Above: Unlisted in PT
Private cover addressed to Air-India International, London. Cover prepared by Philatelie Orient, Bombay with the 12 as stamp issued for use on the 1948 first flight to London, and cancelled with the special boxed rectangular cachet at Bombay G.P.O.
Image courtesy Gaurav Gupta. 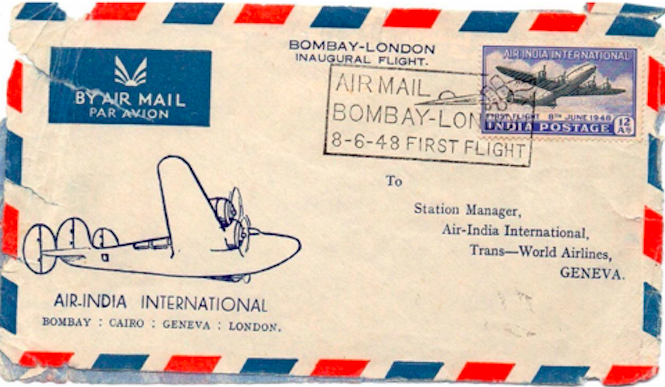 Above: Unlisted in PT
Private cover addressed to Air-India International, Geneva. Cover shows a cartoon drawing of the Lockheed L-749A, with the 12 as stamp issued for use on the 1948 first flight to London, and cancelled with the special boxed rectangular cachet at Bombay G.P.O.
Scan courtesy Gaurav Gupta. The cover is now with Harsh Gupta, The Rudraksha Collection.

I am also displaying some covers below, which cannot be considered Private Covers, since they do not contain anything printed or even hand stamped to link them with the flight. However, they are very interesting, and a joy to keep in a collection 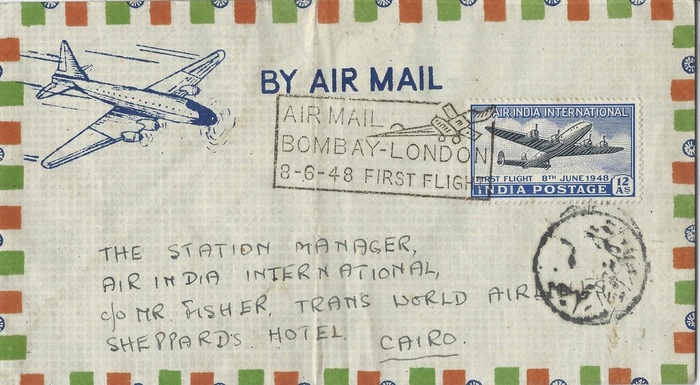 Top: An air mail cover with a aeroplane image printed. what makes this cover design special is the Indian Tricolour motif on the border of the envelope.
Top: Taj Mahal Hotel, Bombay, guest stationary used for a letter mailed to London. On the front is a printed image of the hotel, and on the reverse is a stylised TAJ BOMBAY logo. 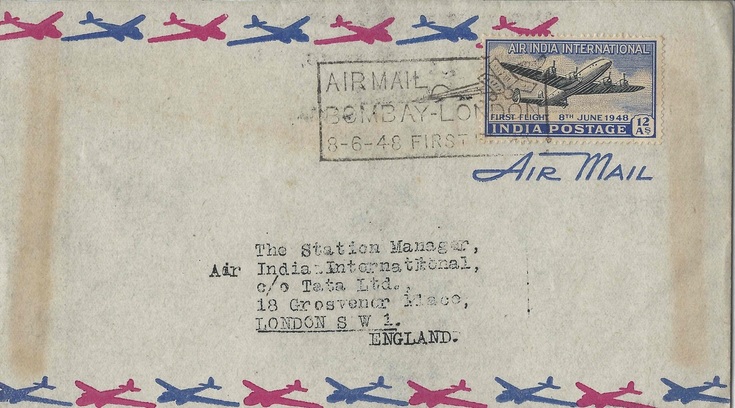